On October 31, 2022, a meeting of the 3.11 Iwate Church Network was held at the Kamaishi Amazing Grace Center in Kamaishi City. 17 pastors, missionaries, and short-term workers from all over the prefecture gathered, mainly from the coast.

There were people we met for the first time this time. They were workers who came to Iwate after the last gathering and those who came as short-term workers during this period. We felt that God’s work through the churches has been continuing dynamically since the earthquake.

In the morning, after self-introductions, there was praise and worship. There was also a report on the support activities in the areas affected by the torrential rain disaster that occurred in Aomori this year, as well as a report on the acquisition of a church building at Ofunato Grace House Church.

Lunch was a very lively time of fellowship. In the afternoon, reports and prayer requests from various areas were shared, and we had an intense time of prayer for each other.

It is truly a great blessing to be given such wonderful fellowship! 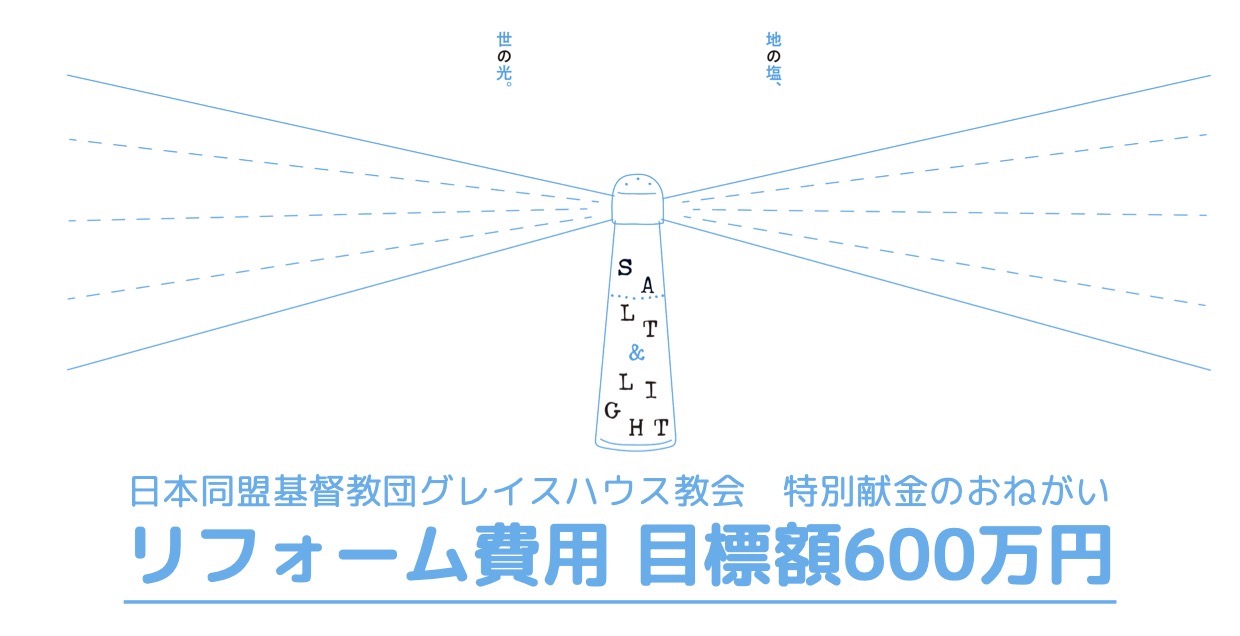 Since the Great East Japan Earthquake in March 2011, you have prayed for, joined in various ways, and supported the work of the church centering on the affected areas in Iwate Prefecture, and we sincerely Thank you very much.

Our prayer has been consistent since the Great East Japan Earthquake: “That the churches will be a base for the work of supporting the affected areas, that they will carry on the Lord’s missionary work, and that they will continue to share their blessings with the local community. 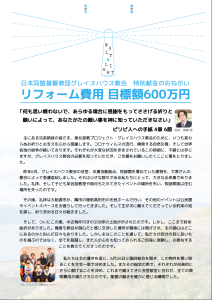 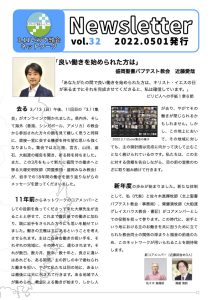 It has been a while since we published a newsletter. Rev. Mitsuru Saito, a new core member, is in charge of this issue.

Please note that the newsletter is only available in Japanese.

In the preface, a report on the 11th “3.11 Gathering” is included. It also reports that Fumiaki Otsuka, who has served as a core member since the establishment 11 years ago, has left Iwate for a new location, and Mitsuru Saito has been added as a new core member.

On page 2, you will find the financial report for fiscal year 2021. 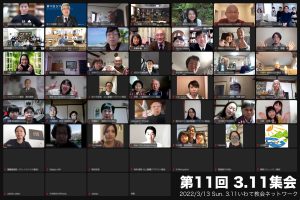 The “11th Annual 3.11 Gathering” for the year 2022 was held online on Sunday, March 13, from 1:30 p.m. Although we did not publicize the event this year, about 90 participants from Singapore, Hong Kong, and the U.S., as well as from within and outside of the prefecture, gathered for the event (the Christian Newspaper covered the event, which will be published soon).

Pastor Kondo, the representative of the network, gave a greeting, followed by an introduction of the work and prayer requests from various places along the coast, and Pastor Taguchi of Morioka Tsukigaoka Church offered prayer on behalf of the participants.

After a praise service with harp performance by missionary Catherine Porter, who had been based in Miyako for a long time (her current base is Sendai City), Pastor Otsuka delivered a message. Pastor Otsuka was one of the core members of the network when it was established, but this spring the Lord led him to leave Iwate and move to Kyushu, so this was his last opportunity to speak at the network. He spoke about his pioneering evangelistic work in the Southern Morioka that began before the earthquake, what he was taught through the disaster, and what he has treasured, along with nostalgic photos.

After the message, the participating churches were introduced as usual, and a time of prayer was held in the breakout room.

Finally, Rev. Kondo gave a report on the future network. In particular, Pastor Mitsuru Saito of Ofunato Grace House Church will join the core members in place of Pastor Otsuka who is leaving Iwate, and he and Pastor Kondo and Pastor Sasaki will serve together for fellowship and cooperation, and will be responsible for dealing with external affairs.

We would appreciate your continued prayers for the 3.11 Iwate Church Network’s work in the coastal areas affected by the disaster and throughout Iwate Prefecture. 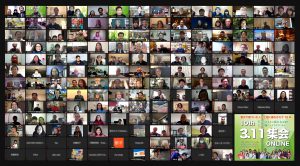 The 10th memorial service in remembrance of the 3.11 disaster was held from 7pm (local Japan time) on 11thMarch 2021.

The service was held on-line.  By doing so, it became possible for participants from outside of Iwate to join us.  More than 250 participants from ten different countries/locations including Japan (Singapore, Germany, Hong Kong, USA, England, Fiji, South Korea, Taiwan and Israel) were able to join us.  Some of the participants had to deal with the time zones, waking up very early in the morning or staying up deep into the night.  We were able to rejoice in our reunion, but it was also a time to reflect upon the pain of the disaster and our Lord’s hand at work, and to also consider where we are being led to from here.

We started the program with an opening video reflecting upon the past ten years, followed by testimonies from the early members of our work: Ps Mitsuhashi from Hocmin, Konishi san from United Project, one of our earliest staff Nagata Michio san who now resides in Israel, Matsui Hiroko san, and Ps Ghent Micah who is now a pastor serving in Aomori.  This was followed by guest appearances from overseas, with messages from Eld Susan Eng of EPJM in Singapore and Catherine Porter who is now on home leave back in the UK, followed by presentations on her harp.  The pastors and missionaries serving in various locations along the coast of Iwate came to share about their ministry and their prayer points.

A clear theme emerged from the sharings from those who served earlier, and from those who continue to serve now, and that is the church.  It is indeed God’s great blessing that the pastors, the brothers and the sisters continued to pray and continued to stand together through the bond of the church, both in Japan and beyond its borders.  Ten years is not a milestone, but a passing point in time.  Ten years does not mark an end, nor does it mean we will be going back to where we before. We will go forth from here, in the union that we have in our Lord, bearing the burden that our Lord has given us to continue to serve here in this place and to continue to share the gospel.  Please continue to remember us in your prayers and be ever-present with us.

You may view the opening video by clicking here https://youtu.be/P35_U_eQO0g.

If you have signed up, you will have received an email with a link to the Zoom meeting. If you haven’t received it yet, please check your junk mail as it may have been filtered. 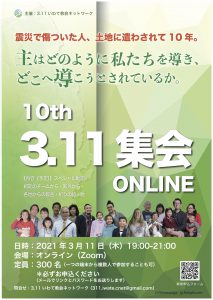 It has been 10 years since we were sent to the people and communities affected by the disaster. Let’s listen to the history and the future with many guests.

We are pleased to announce that we have been able to reopen the website of our network, which was closed due to unauthorized access at the beginning of December last year.

We apologize for any inconvenience caused longtime. 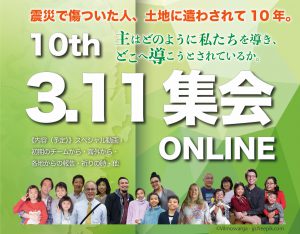